(1) What are the patterns and drivers of climatic and environmental change over long- and short-timescales?

Answers to these questions are important since they provide a long-term context to help us better understand the nature of current climate change and the role that humans have played in driving it. How unprecedented is its rate? How are ecosystems and people going to respond to it? These are questions that can only be addressed through a long-term, historical perspective, using multiple lines of evidence drawn from the geological, ecological, and archaeological sciences.

In our laboratory, we take a highly inter-disciplinary field- and laboratory-based approach to address these problems. Our data collection is focused on sediment core samples from wetlands and lakes which preserve evidence of climate and environmental changes spanning decades to tens of thousands of years. The main analytical methods employed are paleoecological techniques (e.g., pollen and plant macrofossil analysis), sedimentology (e.g., particle size), and geochemistry (e.g., XRF core scanning, magnetic susceptibility) as proxy indicators of past climates and environments. In addition, previous laboratory members have also using tree rings to study questions concerning vegetation response to climate change over the last few decades.

The current research program is centered around three axes:

A key area of the research program involves the development of new records of environmental variability from coastal zones with a focus on the Caribbean and Atlantic Canada. Coastal zones are located at the interface between terrestrial and marine systems and provide important insights into processes such as sea level change, storm activity, and abrupt climate change. Our work at Cenote Jennifer—a flooded sinkhole located on the north coast of central Cuba—has yielded one of the best-dated Holocene-length sedimentary sequences for the Caribbean, and has provided rare low-latitude evidence of the 8.2 kyr event along with information on long-term vegetation succession in response to relative sea level rise. In addition, other projects have focused on the field of paleotempestology (the study of past hurricane activity using geological proxy techniques), such as recent work undertaken in Nova Scotia which has generated evidence for a “hyper-active” hurricane period in the Canadian Maritimes from AD 1450 to 1670. Ongoing research also include a collaboration with the Woods Hole Oceanographic Institution on the development of a new paleo-hurricane record from coastal Haiti. The results of these projects will help us better understand the sensitivity of coastal systems to climate variability, a topic of great importance in light of increased population pressure in coastal zones worldwide.

We are providing new insight into the complex relationships between ancient people, the environment, and mammalian extinctions in the Caribbean region. Recent data suggests that the extinction of large mammals, such as sloths, occurred in the Greater Antilles between 4000 and 5000 years ago. Current hypotheses suggest that either human activity or rapid climate change were key factors in the extinction event, but there is very little data to support either of these positions. With colleagues from the Museo Nacional de Historia Natural in Cuba and other universities and organizations, we have been investigating a submerged cave where the remains of extinct sloths have been uncovered. Our highly inter-disciplinary work has provided important new information on the environmental context in which now-extinct mammals in the Caribbean lived, which is allowing us to more deeply explore connections between climate/environmental change and extinction. Moreover, in collaboration with archaeologists from the Instituto Cubano de Antropología, the University of Winnipeg, and elsewhere, we are examining human settlement responses to landscape change in eastern Cuba. These projects will help us better understand the complex relationships and feedbacks between the natural environment and anthropogenic activities, which may help inform ongoing conservation efforts.

With collaborators at Tallinn University of Technology in Estonia, Northeast Normal University in China, and the Université de Sherbrooke, we have been studying long-term vegetation and climate dynamics from the late Glacial to the present in southeastern Canada and northeastern China—two regions with a strikingly similar climate and flora—using a variety of proxy data such as plant macrofossils, pollen, testate amoebas, and tree rings. Specific areas of interest include the evolution of peatlands in these regions, and how plant diversity has changed in the past in response to climate variability and disturbance. Future collaborations with researchers at Concordia University will result in the development of high-resolution records of climate and vegetation change over the last 2000 years to explore questions to do with the sensitivity of hardwood forests to events such as the Medieval Climate Anomaly and the Little Ice Age. 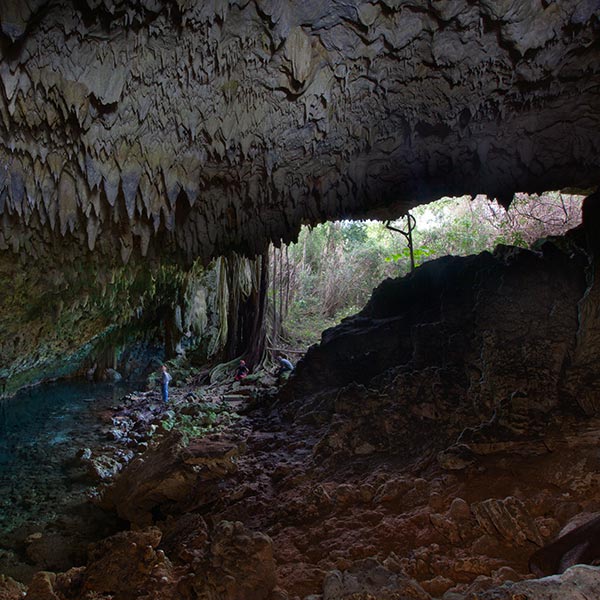 Flooded caves and sinkholes offer enormous potential as repositories of information on past climates and ecosystems. With collaborators and support from the National Geographic Society, the Cuban Museum of Natural History, the University of Miami, and elsewhere, lab members are involved in a project examining the relationship between climate, ancient people, and extinct sloths in a cave in western Cuba. The fossilized remains of three sloths were recently identified and recovered from the cave along with sediment and water samples. Sloths went extinct in the Caribbean around 4000 years ago, not long after the arrival of humans, and our research—which will involve the dating and isotopic analysis of the bones, along with the micropaleontological analysis of the cave sediments—will help us better understand the nature of prehistoric extinctions and the degree to which humans caused them. In addition, our sediment analysis research, which will focus on reconstructing the flooding history of the cave, will provide information on how underground freshwater resources may be impacted by climate change in the future. 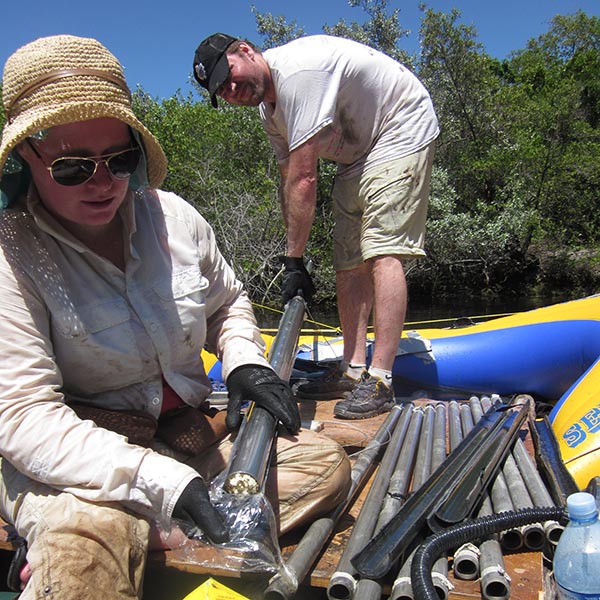 Coastal sediments are being studied from multiple sites around Cuba to better constrain patterns of Holocene climate change and identify how hurricane frequency varied in the past. With colleagues at McMaster University and the Coastal Ecosystem Research Center, Gregory et al. (2015) documented the onset of progressively drier climatic conditions during the late Holocene caused by changes in atmospheric circulation using data derived from high-resolution XRF core scanning and benthic foraminifera assemblages. At a site in eastern Cuba, Peros et al. (2015) used particle-size analysis to identify several periods of more frequent hurricanes during the late Holocene, providing important new information about the factors influencing hurricane activity in the Caribbean and also hurricane return-period. For her thesis, Anna Agosta G’meiner studied the sediments preserved in Cenote Jennifer, a flooded sinkhole located on the island of Cayo Coco, off the coast of north-central Cuba. The Cenote Jennifer core provides a continuous ~9000 year laminated record that ought to yield one of the best-dated sequences of Holocene environmental change from the Caribbean to date. The sediments are being studied for pollen and charcoal (to reconstruct regional vegetation and fire history), elemental composition, and other proxies, to document the environmental history of the island and determine the origin of the laminations. The findings from this work illustrate the vast potential of sinkholes as archives of high-resolution environmental information. 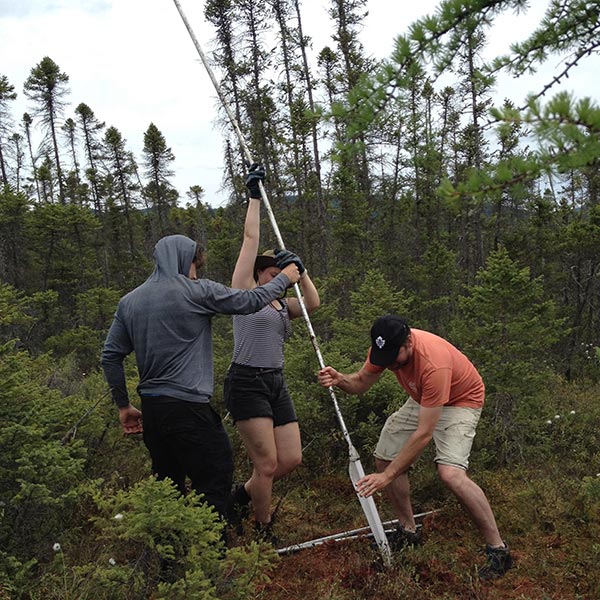 Using tree rings, pollen, and charcoal analysis, laboratory members have been examining questions related to the response of vegetation to recent climate change and human activities. One important site of research is the Johnville Peat Bog, a unique ecosystem in southern Québec that supports a sub-Arctic type vegetation community. Research by undergraduates Jennifer Ward, Jamie Carroll, Andrew Manouk, and Julien Vachon has shown that historic landuse changes affected the bog environment as early as AD 1800, when the region was first settled by people of European origin. Since that time there have been further impacts, including the drainage of the bog in the mid-20th century, which appears to have led to the expansion of black spruce trees across the site. The work of these students is important as it provides valuable environmental baseline data to inform ongoing restoration efforts at the bog. Elsewhere in southern Québec, M.Sc. candidate Benjamin Marquis has been studying the response of sugar maple and yellow birch trees to recent climate change using tree rings. Specifically, his work addresses whether trees at their range limits are more sensitive to climate than trees nearer to the center of their ranges. Undertaking this project at Mont-Mégantic National Park, which provides an excellent altitudinal gradient to test his hypotheses, Benjamin’s research will be important for informing us about how these tree species will respond to climate change under future global warming scenarios. 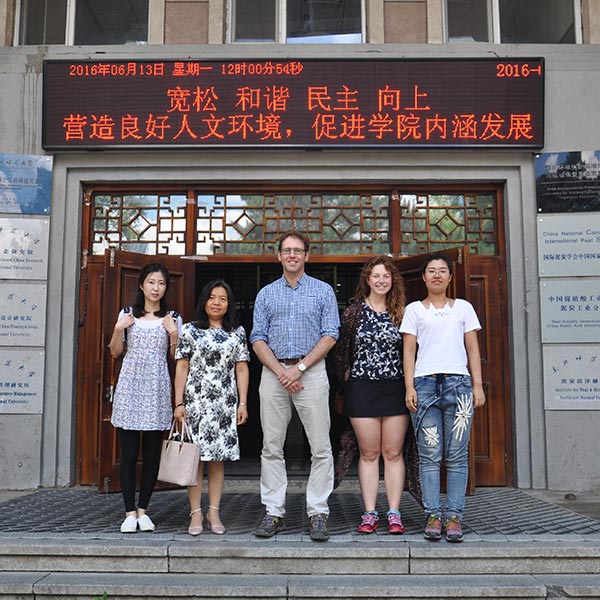